Mortality cross subsidy - Actuaries calculate annuity rates assuming people will live until their normal life expectancy. Some policyholders will die before they are expected to and some will live longer than expected.

Insurance companies make a profit from those dying early and a loss from those living longer, and they use the profits from the early deaths to subsidise the income paid to those who live longer than expected - This is mortality cross subsidy.

Mortality cross subsidy is unique to annuities and clearly favours those in good health who may live longer than expected at the expense of those who will die before their allotted time. To overcome this problem insurance companies pay enhanced annuities. Enhanced annuities pay a higher income for those who have a medical condition that may reduce their normal life expectancy When drawdown was first introduced, a well-known actuary pointed out that comparing annuities with drawdown was not comparing like with like, because with annuities, policyholders benefit from mortality cross subsidy whereas with drawdown they do not.

This makes comparing annuities with drawdown difficult but it is important to understand the effect of giving up a guaranteed income for life in favour of pension drawdown where there is mortality cross subsidy.

However, if you intend purchasing an annuity in the future you will need to take account of mortality drag if you want to maintain your annuity purchasing power.

You can’t see mortality drag as an explicit charge but it really does exist even though it is invisible.

Top Tip Mortality drag is not a big issue under the age of 65, but after that it becomes more significant. This means that if you are over the age of 65, and thinking about investing in drawdown or not taking income from your pension pot, with a view to purchasing an annuity later in life, you should think seriously about purchasing your annuity sooner rather than later to avoid a reduction in income.

This might sound like double Dutch, but all you need to know is that when comparing an annuity with a drawdown, is that drawdown has to compensate for the absence of mortality drag by producing consistently higher returns each year compared to the underlying rate of interest used to price the annuity. The amount of drag increases with age as the charts demonstrate. 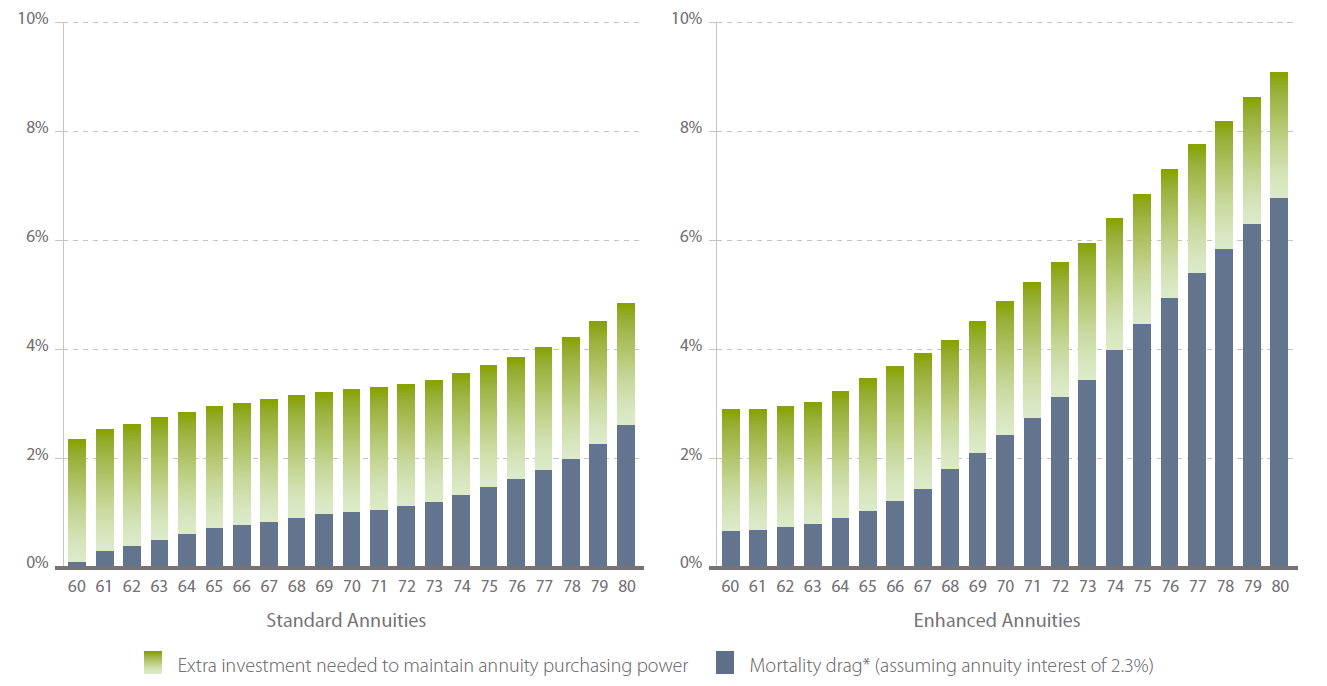